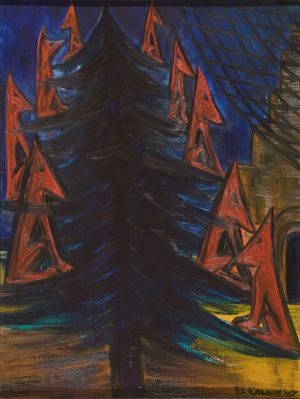 To El Kazovsky (1948, Saint Petersburg/RUS – 2008, Budapest/H), the festive season and the rituals around the Christmas tree were of enormous significance. Several recounts note that the artist preferred to keep multiple trees in his home during the festivities, sometimes as many as four of them. Holding on to all ornaments from his childhood home, Kazovsky was also the owner a large collection of diverse Christmas decorations. From his trips, he regularly returned with new ornaments and was gifted several ones by his friends who travelled extensively around the world.
Despite his fascination with Christmas, the 1992 painting ‘Nine Wolves on the Christmas Tree’ is nearly the only artwork by Kazovsky featuring festive motifs. The composition, centring around a dark-coloured pine tree, features many enigmatic symbols from Kazovsky’s personal mythology, such as the closed curtain in the upper right corner of the canvas or the architectural feature in the background. Beyond all this, however, we must mention the most important, permanent character of Kazovsky's peculiar mythology, the migratory animal, which, multiplied here, can be seen as ornaments of the pine tree. This animal returns frequently in the artist’s complex visual world. The sitting figure, painted with the characteristic red of El Kazovsky, depicts, in the artist’s own words, “the human subject, the active, enthusiastic being” who wanders from painting to painting but never settling, unable to find a steady home.