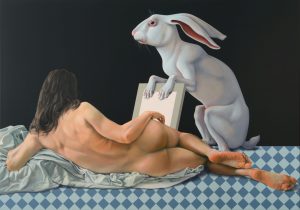 The concept of ‘Mirror, Mirror’ evokes that of Rokeby Venus, the only surviving female nude by Diego Velázquez, currently on display at the National Gallery in London. The title of Orr’s artwork refers to the fairy tale of Snow White, which, combined with the figure of Venus, clearly elevates beauty to the object of the picture. It is difficult to determine whether the nude body in the foreground is that of a man or a woman. Evoking the ancient marble sculpture ‘Sleeping Hermaphroditus’, the figure bears both feminine and masculine features. Although throughout the history of art, predominantly women were depicted in such position, Orr deliberately blurs the line between the sexes and the painting proclaims the beauty of the male and female bodies at the same time.