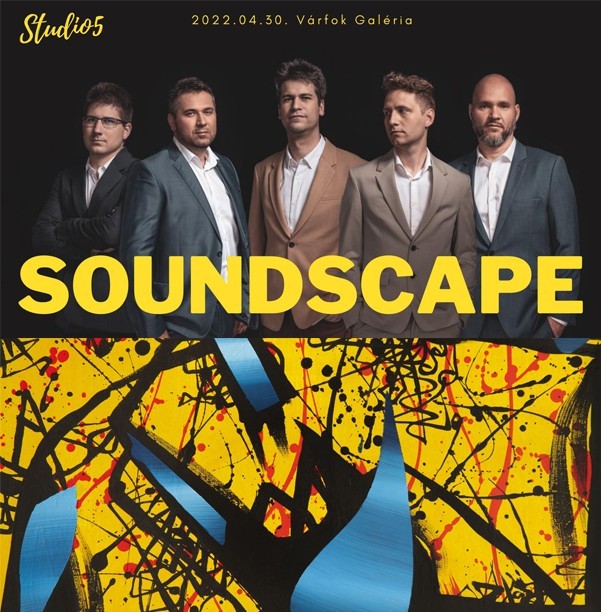 János Szirtes’s solo exhibition entitled ‘Oxygen’ presents his latest works which are full of vital energy, exploding with life and vibrant colours. In some instances, the paintings refer back to explorations of space as in Szirtes’s past abstract series, whilst others evoke the visual world of the 1980s through the inclusion of particular formal elements. Cellular organic shapes, spontaneous gestures reminiscent of hieroglyphic scripts, geometric forms and metallic surfaces all intermingle within the deep space of the paintings, which open inwards.

These latest works, imbued with the Spirit of Life, open a new era in Szirtes’s prolific and profound artistic work, providing further evidence of his instinctive multidisciplinarity.
In addition to Szirtes’s latest works, the exhibition will also showcase some intriguing works from the 1980s which have not been seen by the public since that time.

János Szirtes [1954, Budapest] is an iconic figure of the Hungarian contemporary art scene. A painter, graphic performer, video and media artist, Szirtes’s exhibition, ‘Oxygen’ at the Várfok Gallery is the inspiration for STUDIO5’s new compositions which visitors can enjoy during a guided musical event. The compositions present possible musical analogies for Szirtes’s paintings including  incidental and strictly controlled elements, colours and patterns. The five chamber pieces by five composers can be considered as audible manifestations of psychological mechanisms of action. 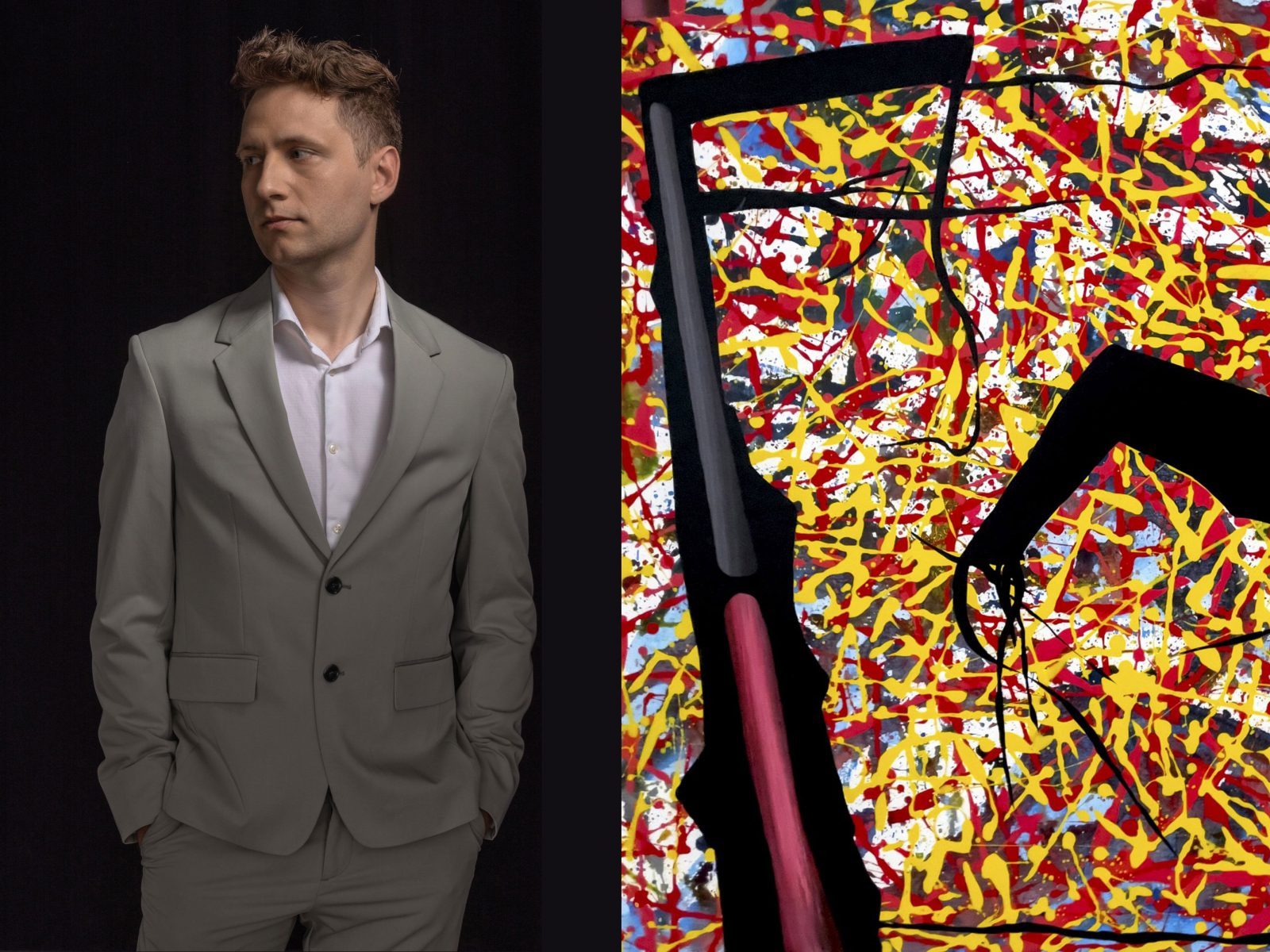 Secondly, Szirtes’s painting ‘Verőfény’ [‘Sunshine’], captured me at first glance, as the three primary colours of red, yellow and blue dominate the work, creating a dynamically radiant, almost glowing picture. At first sight, random gestures are interrupted by two distinct formal shapes. The shapes, like the roots of a tree, make their way through a “sea of light”. I tried to express this clear concept with musical analogies while writing my piece.

‘Monochronic’ is a monothematic-variational form based on a rhythmic mirroring and abbreviation of five chromatically descending scales. The theme consists of strictly limited musical elements, of identical length, kept fresh by experimental variations of pseudo polyphony of quint-towers and minor-triads. The polyphony emerges from unusually fast movements of the bass clarinet. The strict form is occasionally interrupted by extreme timbral elements of a short formal passage, just as the root-like shapes in the Szirtes picture interrupt a dense sea of patterns. 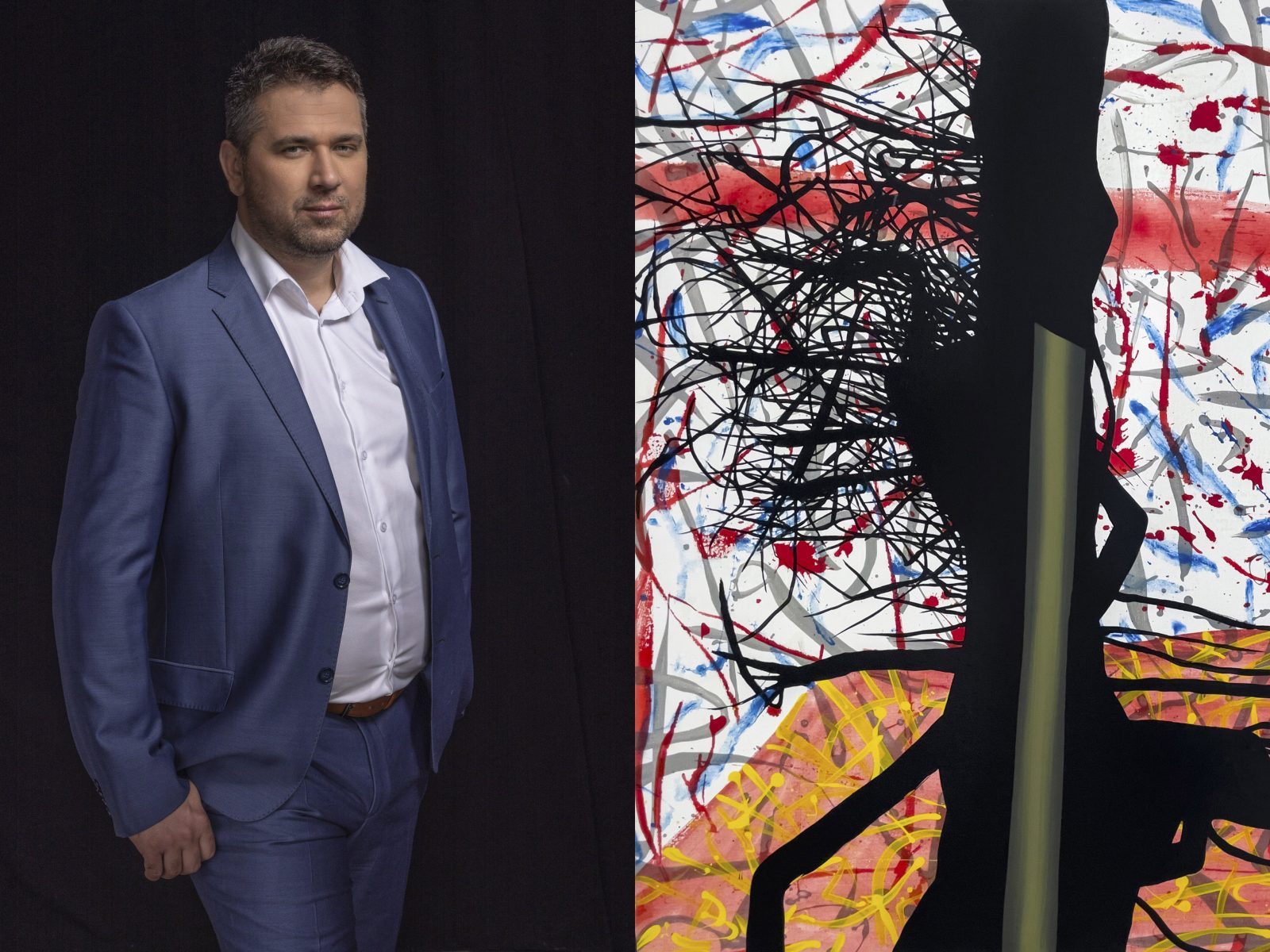 ‘Crepusculum’ is my composition based upon the painting ‘Fényes jövő’ [‘Bright Future’].

At first I saw a lonely tree, aggressively torn apart by storms, and later, in consideration of the title, a sad, sinister meaning began to unfold. Two ideas appear to be linked.

The tree stands lonely in the darkness, watching the events of the present, which are incomprehensible to it. Throughout its life, the tree is condemned to remain motionless, helpless, watching the world and its destruction, unable to intervene. The tree must watch as people destroy their environment more and more severely, thereby rendering their own future impossible. From this interpretation, I built my own musical motifs from the gestures in the painting. Crepusculum means twilight, the moment when darkness takes over from light. For me, ‘Bright Future’ is an ironic title which has a dramatically sobering connotation. 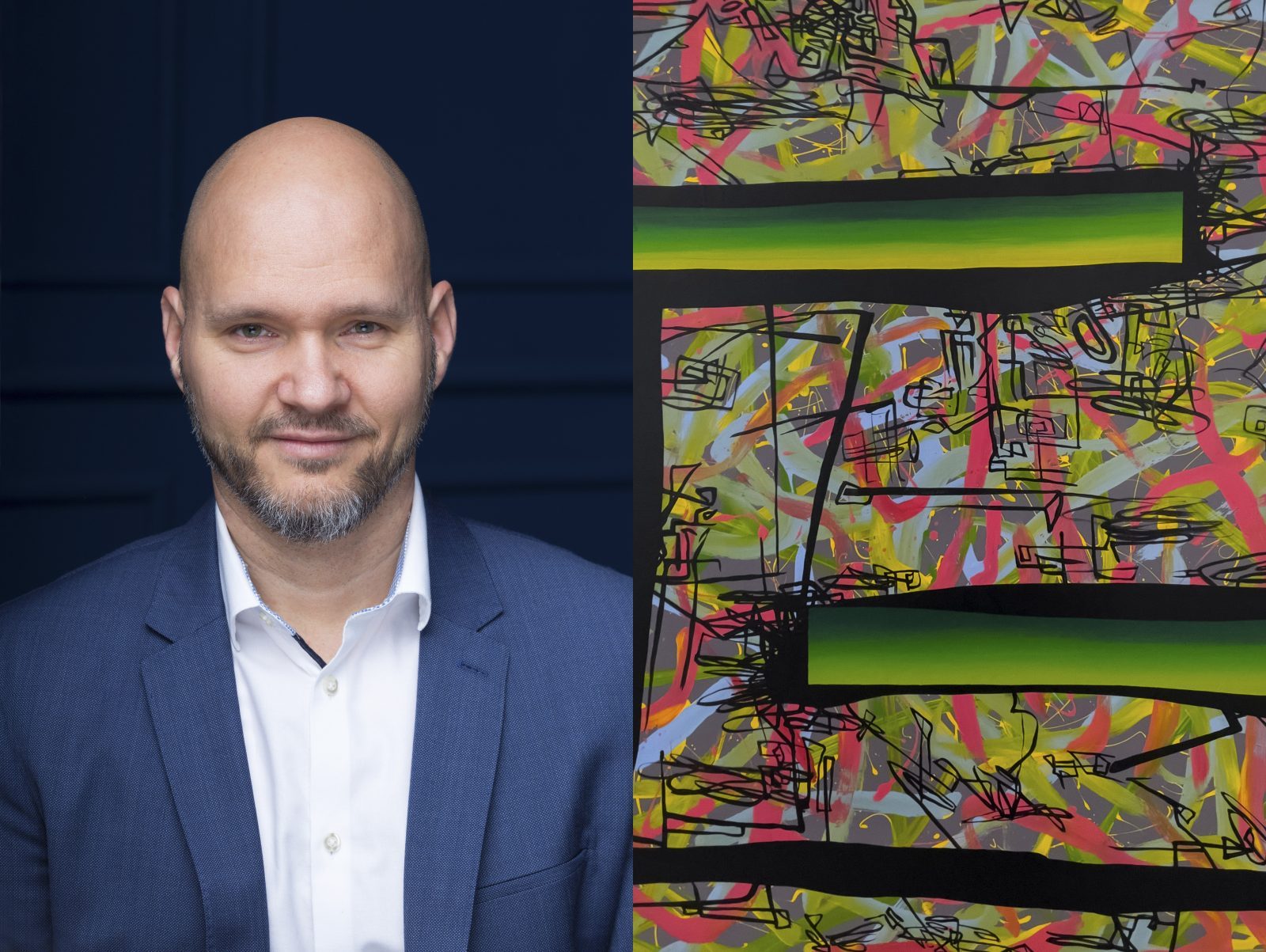 Roland Szentpáli – ‘The Breeze of Spring’

János Szirtes’s painting ‘Rügyfakadás’ [‘Bud Burst’] inspired my piece for soprano saxophone. While composing the piece, I was not aware of the title of the painting, but the freshness and breeziness of the painting’s swirling palette of colours stirred my imagination.

The musical phrases of the piece, which unfold over a long period, appear as improvisations, literally starting or becoming airborne, as if the wind, not the player, were playing the instrument.

Within the composition, the melody of a well-known children’s song is hidden. The melodic fragments disappear or emerge, serving to paint in music the mood radiated by the Szirtes painting and the lyrics of the children’s song. 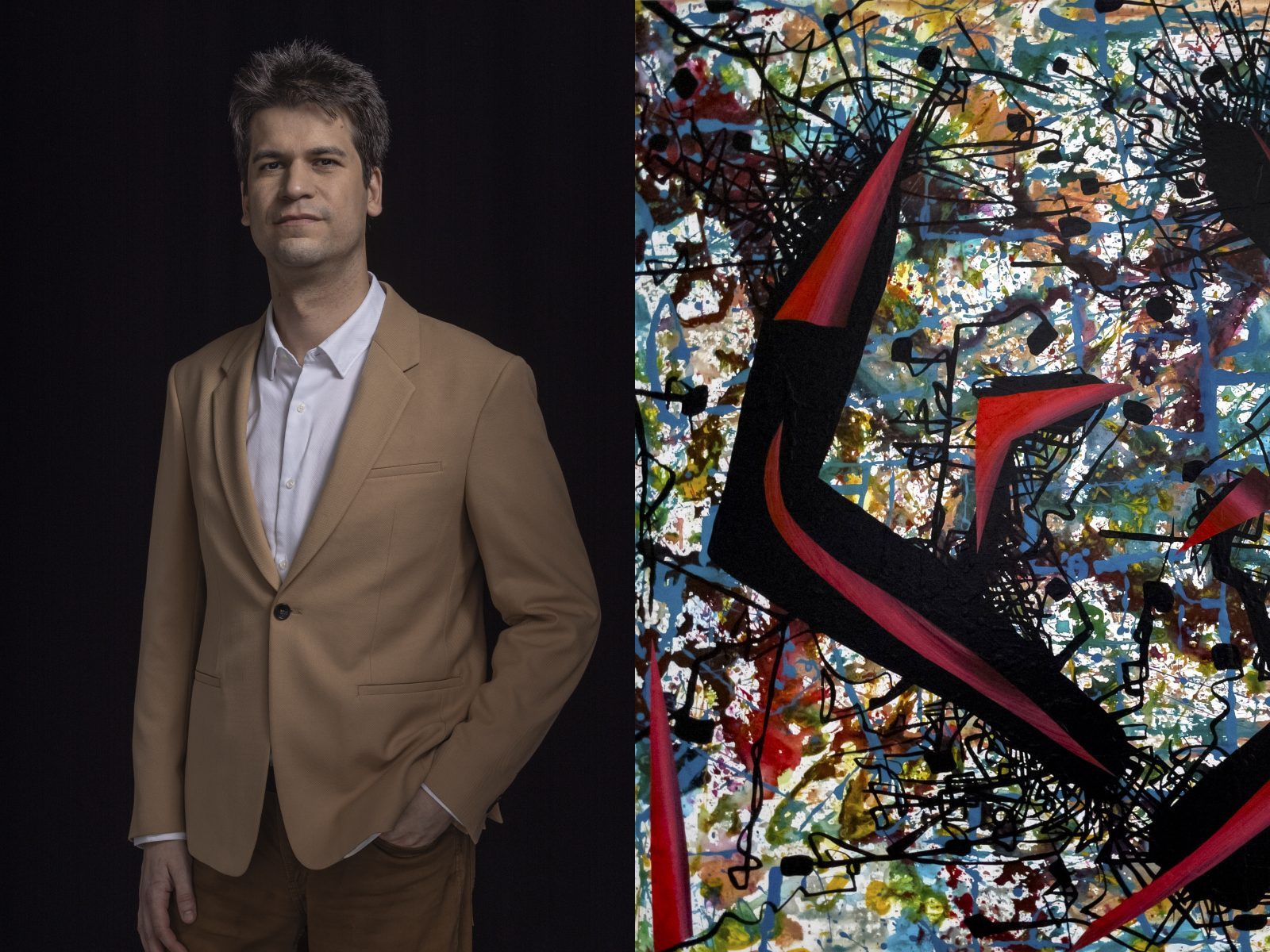 My composition for solo cello, ‘Parallels’, was inspired by Szirtes’s painting ‘Kis Buddha’ [‘Small Buddha’]. The ‘leitmotif’, reminiscent of a boomerang, appears in several transformations in the painting, which determined the structure of the cello melody. The music can be divided into three large units, but each of the formal parts reveals a cyclically recurring motif that frames the composition as a whole. 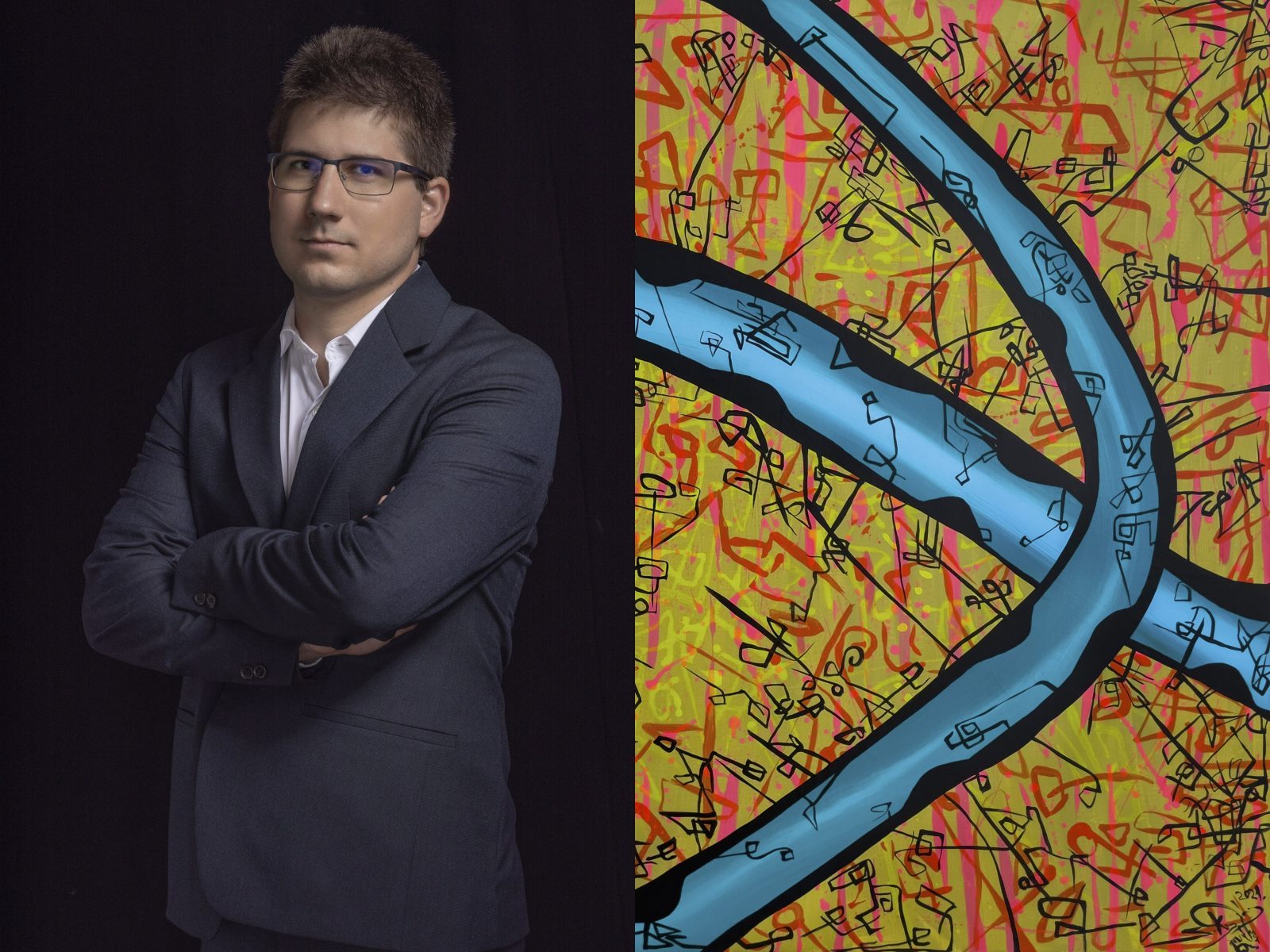 Bright colours, vitality, the joy of life.  These are the words that come to my mind when looking at János Szirtes’s exhibition ‘Oxygen’. The painting I have chosen as the inspiration for my composition, ‘Megáll az idő’ [‘Time Stops’], is also very dynamic and contoured, but the greenish carpet that provides the background also contains pastel colours, which, at least for me, gives the painting a touch of gloom and sorrow. I thought a lot about how to capture the atmosphere of the painting musically.

In considering how to recreate the atmosphere of the painting in music, I read János Lackfi’s early poems.  Four of them in particular, ´To hurt´, ´Hardship´, ´The Past´ and ´In the Valley´ when read in context with the picture, captured my imagination. The mini-song cycle, written for voice and cello, simultaneously evokes elements from J.S. Bach’s cello suites.  Impressionistic colours fusing voice and cello are contained within the musical imprint of formal structures, the whole inspired by the works of Szirtes and Lackfi. 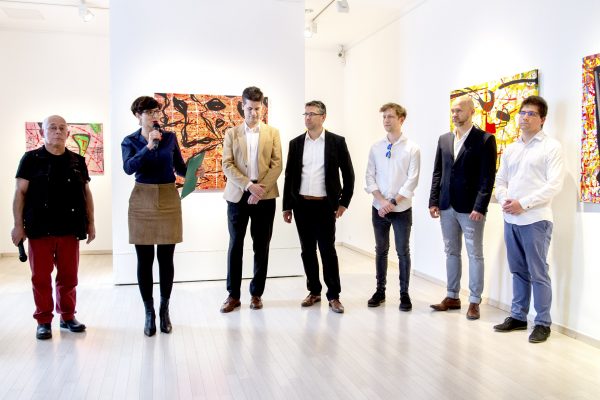 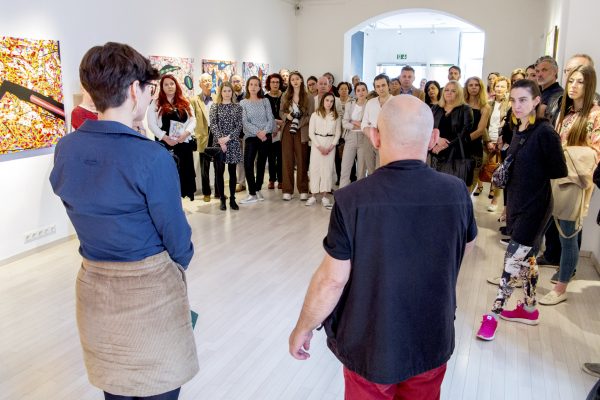 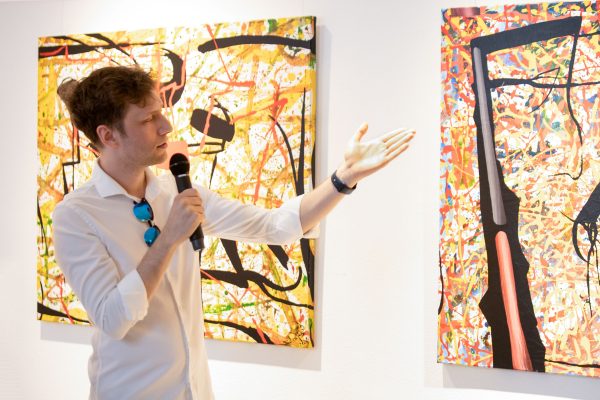 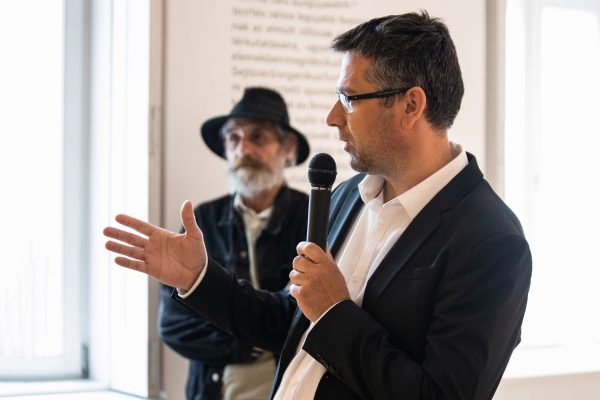 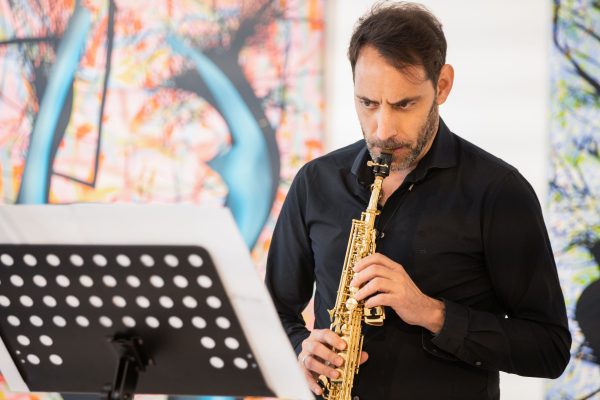 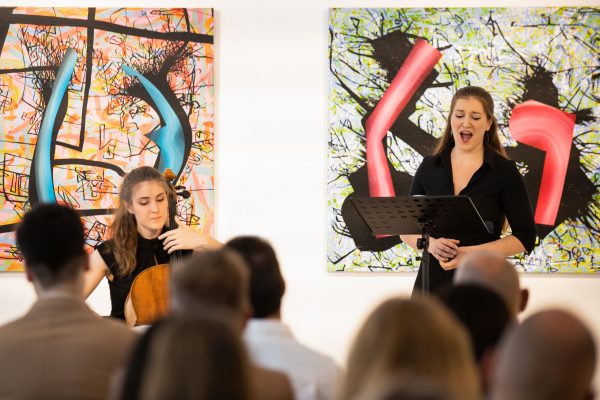 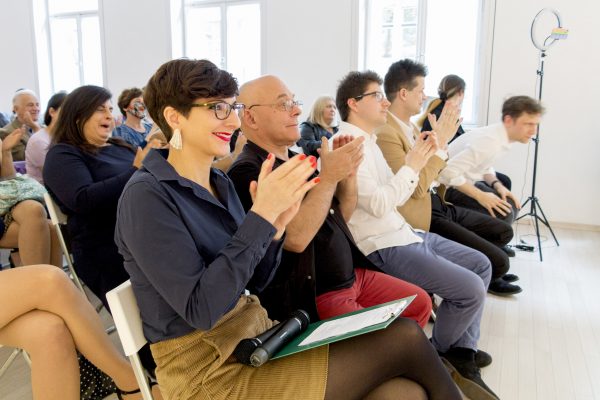 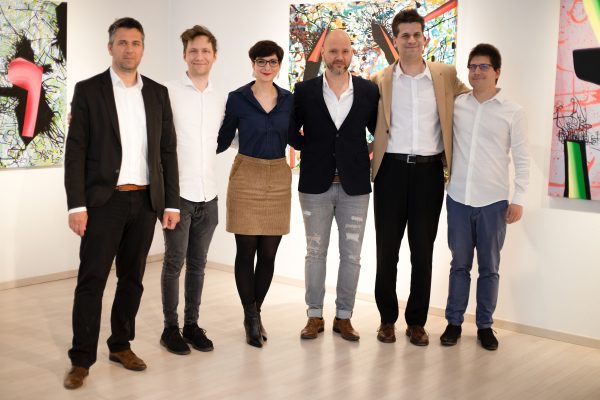 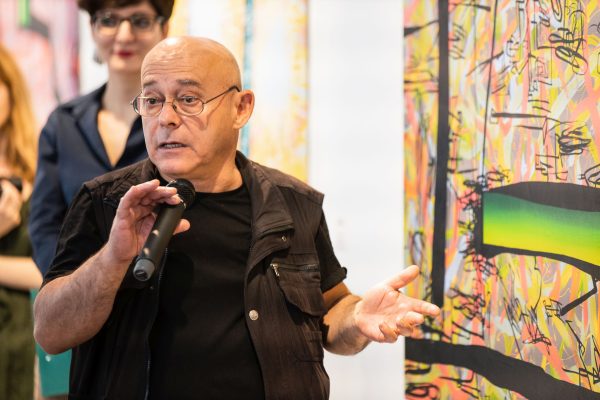 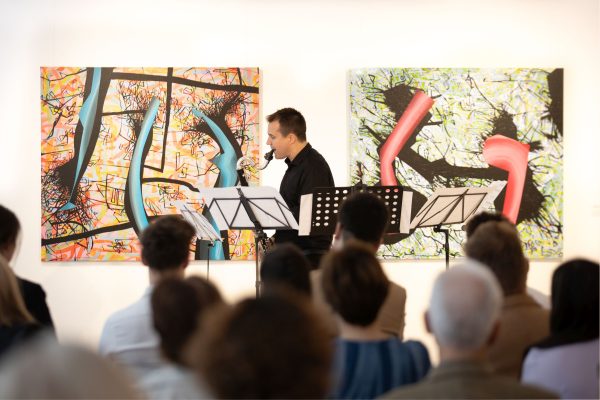 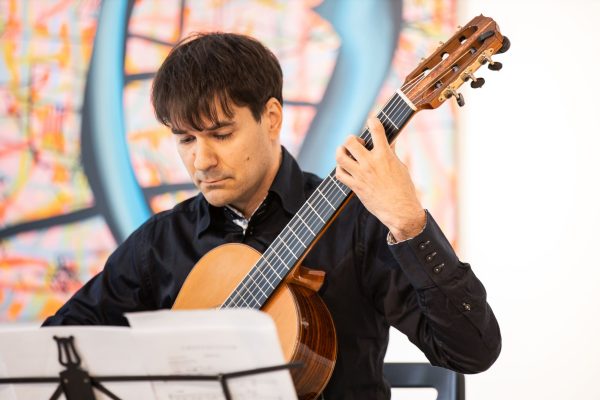 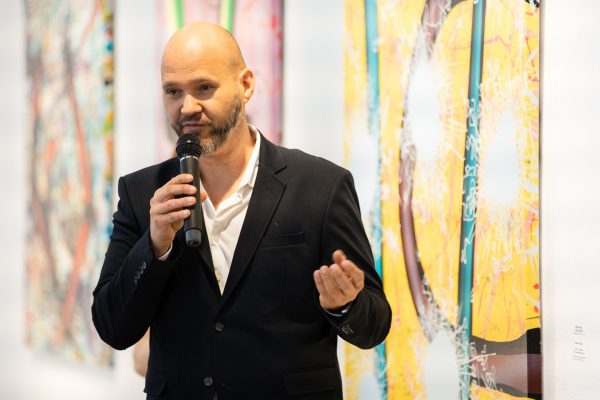 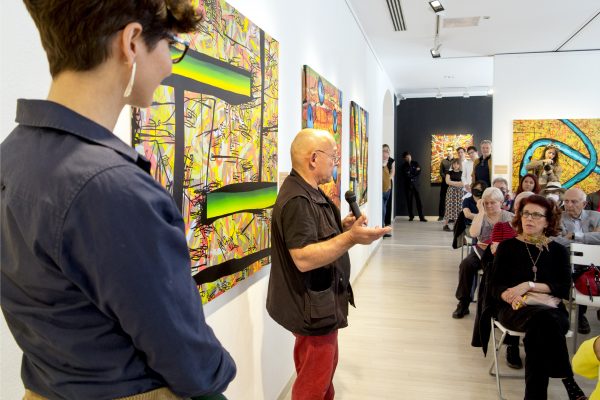 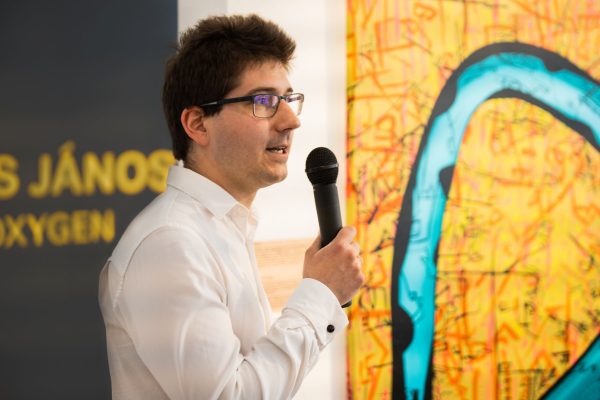