Várfok Gallery’s April selection of exhibitions will consist of the introductions of three artists, who recently joined the circle of artists of the Gallery. In one night opens the joined exhibition of Tamás Jovanovics and Károly Keserü in the main venue of the Várfok Gallery, while in the Project Room the circle of photographers of the Gallery salutes a new member in the person of Bence Bakonyi.

The oeuvre and artistic path of Tamás Jovanovics and Károly Keserü holds numerous similarities. To start with, they both move freely on an international field, they both lived abroad for an extended period of time, worked and met each other there, while their works were mainly exhibited abroad as well. Their presence on the Hungarian field only started to strengthen and become regular in the past few years.

Tamás Jovanovics (1974, Budapest) led his art studies at the Hungarian University of Fine art, the Aix-en-Provence Université de Provence and the Slade School of Fine Art in London. In 2009, he won the Premio San Fedele Curatorial Special Prize in Milan and in the same year took part in a three month scholarship at the Harlem Studio Fellowship Artist in Residence program in New York. Jovanovics exhibits on a regular basis in London and Milan, as well as the audience could view his works in numerous metropolises, such as Berlin, Brussels, Moscow, New York and Rome. His latest solo exhibition recently opened in the Kiscell Museum in Budapest.

Károly Keserü (1962, Budapest) migrated to Australia in 1987. He led his fine arts studies there, on the Swinburne University and the Victorian College of the Arts. In 2000 he won one of the utmost significant fine art prizes of Australia, the Samstag, which helped him to continue his studies in London on the Saint Martins College of Arts, where he gained his Masters Degree. His works can be found in numerous collections in Australia, the United States of America and throughout Europe. Due to Keserü’s Gallery in London, the Patrick Heide Contemporary Art, he is a regularly exhibited artist of international art fairs.

With the currently opening joint exhibition of Tamás Jovanovics and Károly Keserü the venue of Várfok Gallery rises to ethereal heights. The geometrical web of colourful dots and lines woe the space, the constant pulse of repetitive musical rhythms brings the waves of otherworldly tunes. Based on the utmost ancient and simplified forms, the artworks are worthy heirs of the 20th century abstract geometrical tendencies. Even if we focus on the fixed threads in layered wax and colourful dots, or the network of parallel or crossing pencil drawn lines, we are viewers of micro cosmoses widening towards infinity, mediums of existential questions, eternal truth and personal universes. Surprisingly there is a playfulness of colours in the mathematical mellowness, the happiness of elaboration in repetitive works, which leads to the weightlessness of the compositions. As if nothing was more natural, than what we see. Cosiness covers us, the glimpses of long awaited answers to eternal questions with the feel, that existing could also be easy. 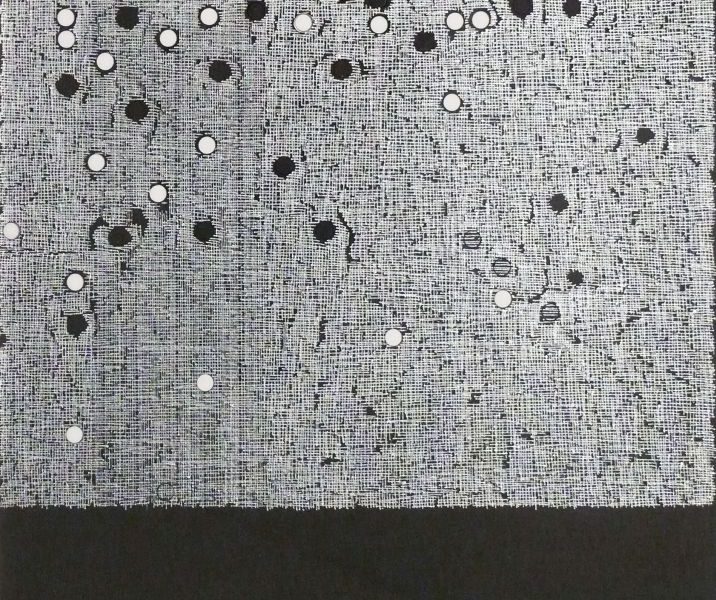 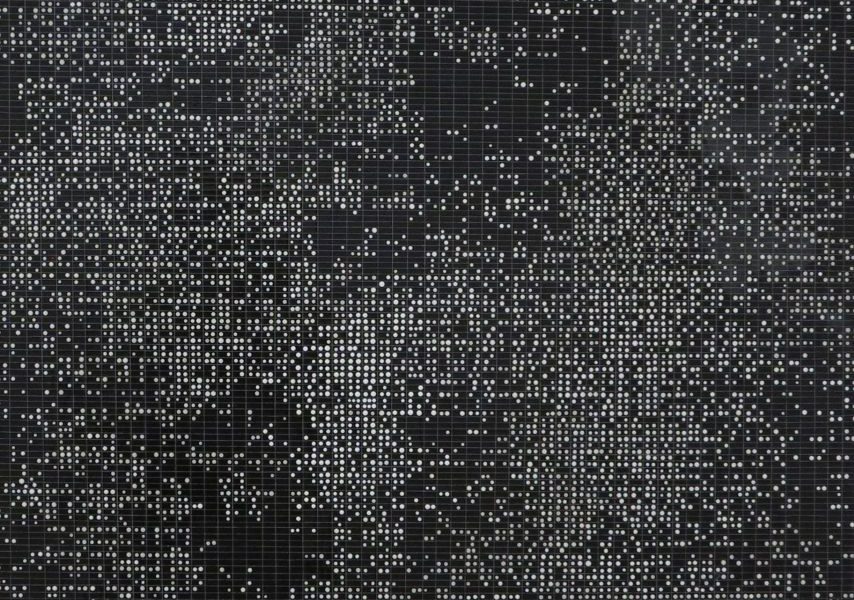 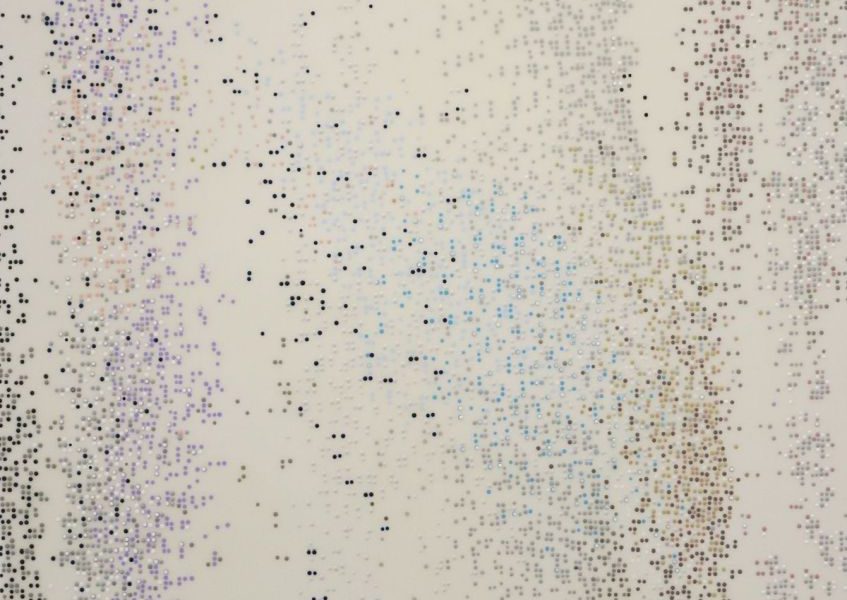 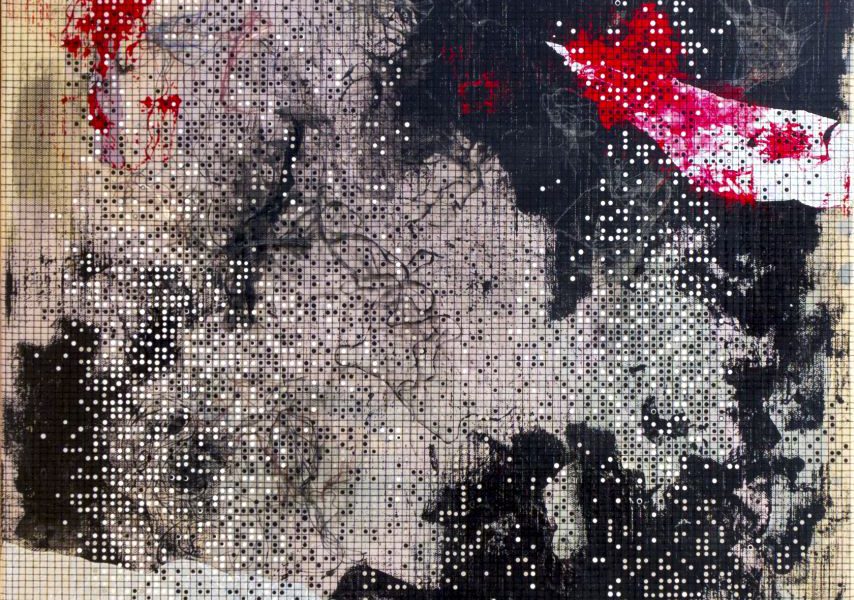 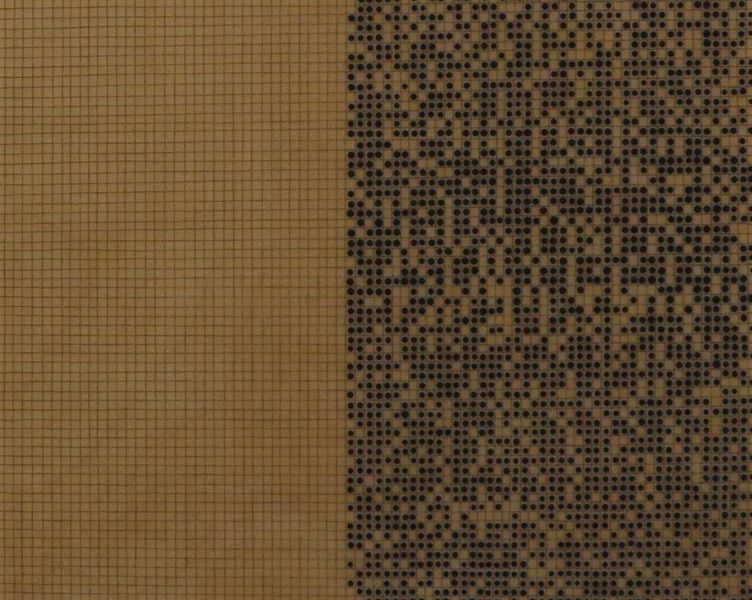 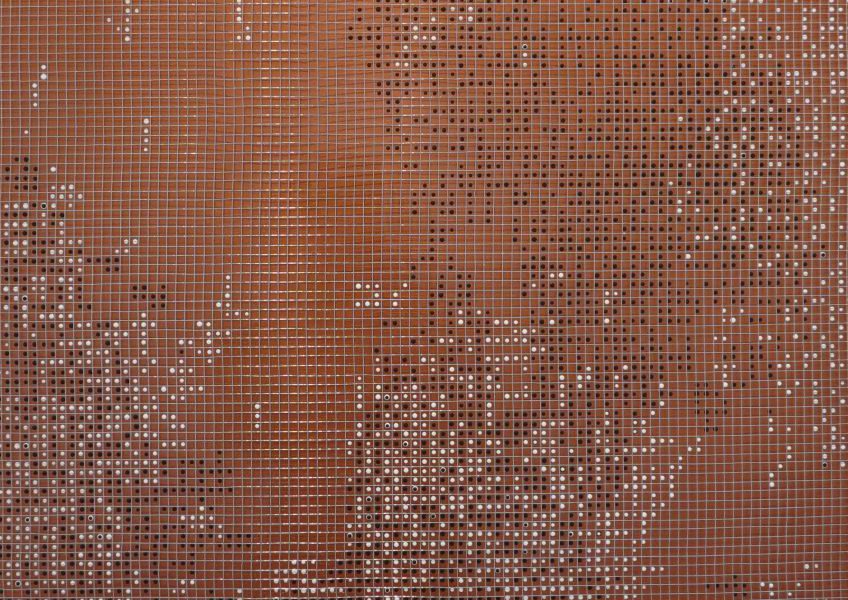