László Győrffy: In Rot We Trust

The Várfok Project Room’s new exhibition showcases the recent works of László Győrffy (1972, Budapest/H). In his new exhibition entitled In Rot We Trust Győrffy is trying to deal with the vitality that grows from the degradation based on its characteristic horror-traditions and post-apocalyptic anthropology. As George Bataille wrote: „Blindfolded, we refuse to see that only death guarantees the fresh upsurging without which life would be blind. We refuse to see that life is the trap set for the balanced order, that life is nothing but instability and disequilibrium.” In his acrid „revelation” Győrffy is interested in examining the dead or zombified genres of fine arts and rewriting childhood visual experiences. In his works, the blending of private images and official representation is realized through various media.

The body-horror, which has been a major theme throughout Győrffy’s career, is now transformed into a series evoking public connotations through the tradition of the oil-canvas portrait painting of his early images. The Project Miasma’s portrait gallery, which was inspired by anonymous military and political portraits that Győrffy seen during the frequent museum visits of his childhood, gives birth to a fictitious government. The anachronistic genre of representative historical portrait painting, through the filters of nightmares and paranoia, comes together in a state cabinet of a non-definable region of time and space, where death is not the end of the reign, but it is the basic condition for the permanent functioning of the Necrocracy.

The theme of rot is also presented at the exhibition by the medium of sculpture, that is becoming more and more important in Győrffy’s art in the form of handcrafted deconstructions: the sculptures created of rusted metals and waste wood make conscious artistic method from the former experiments of elementary school’s “art classes”. These static structures, supplemented by fragments and imitations of the human body, presupposes motion and act as post-apocalyptic monuments raised in the name of dysfunction.

The exhibition’s sole paperwork, the first piece of the Exquisite Corpse series, also presents the network of inscrutable structures. The watercolour that summons the surrealist game, based on a coincidental principle, projects the encyclopaedic pannotes of medieval representation of hell to the world of illustrative picture books that are decisive for the adult generation in the 1980s, for example Richard Scarry’s Busy World and Judy Hindley’s How Your Body Works as well. In Győrffy’s rhizomatic summary, as in the other works of the exhibition, dysfunction and chaos become the guiding principle of the hybrid aesthetics of disintegration. 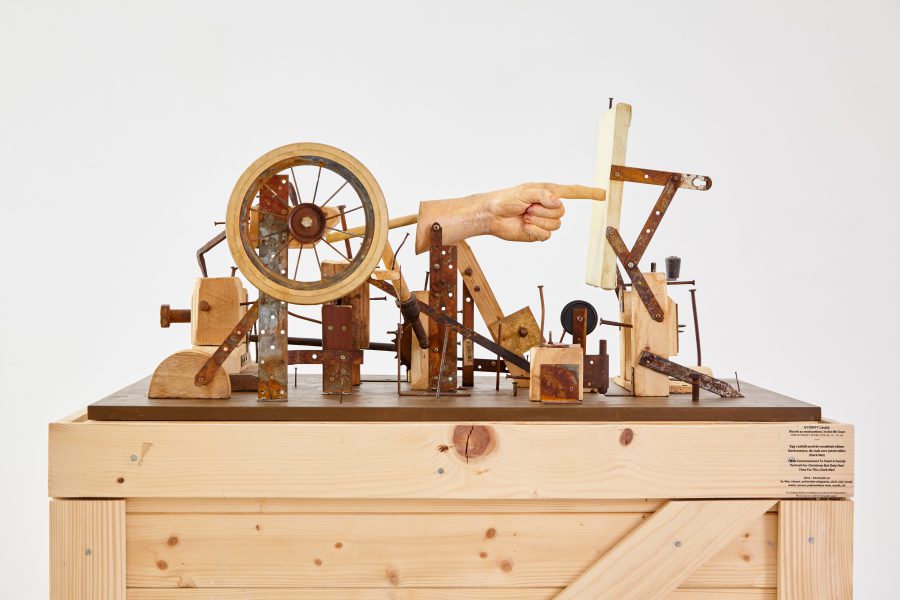 I was Comissioned To Paint A Family Portrait For Christmas But Only Had Time For This (Dark Net)
2018 - 93x45x66 cm
wood, metal, canvas, polyurethane resin, oil and acrylic paint
In the Várfok Gallery 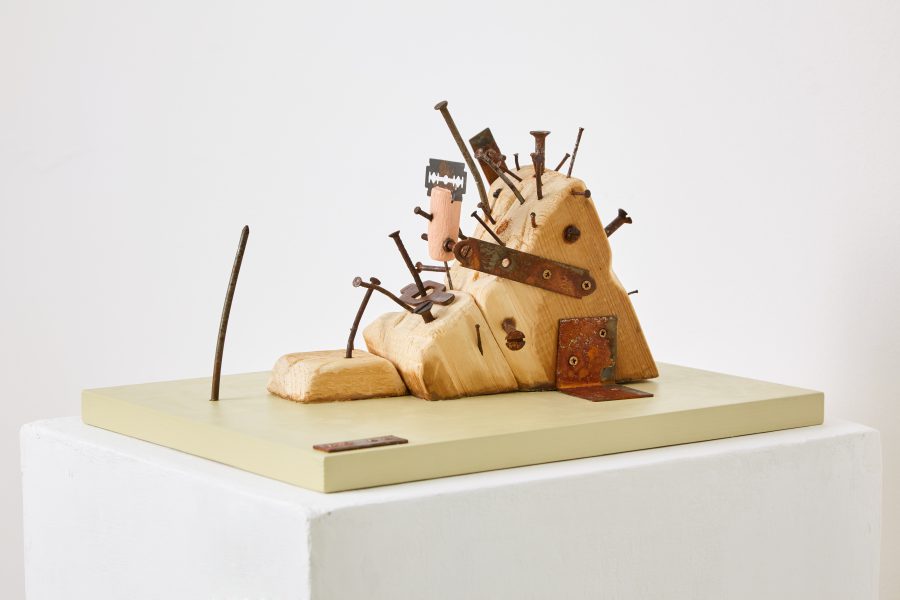 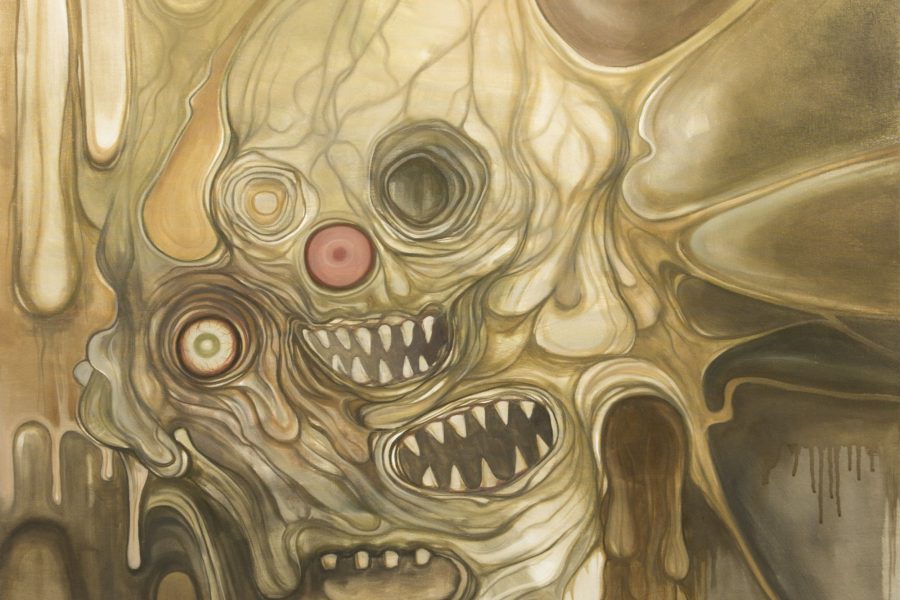 Exquisite Corpse I (I Saw Tatlin And Calder Having Sex in Hell, And I Couldn't Resist Taking A Selfie With Them)
2018 - 70x50 cm
watercolour on paper
Private Collection 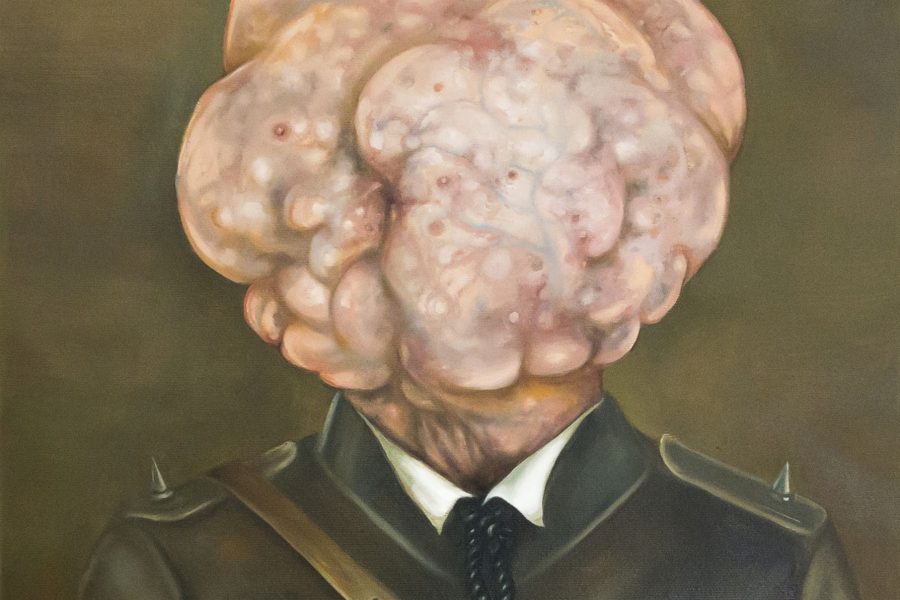 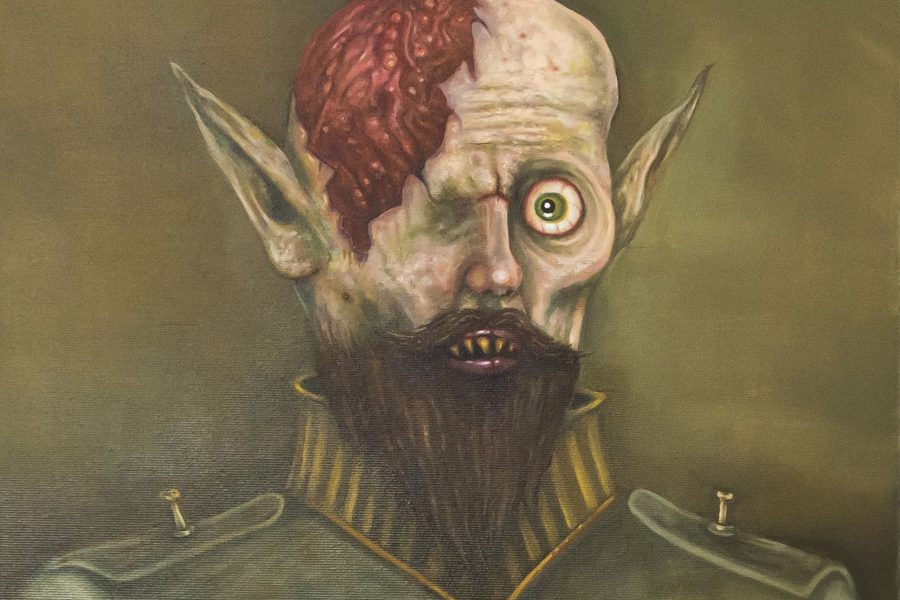 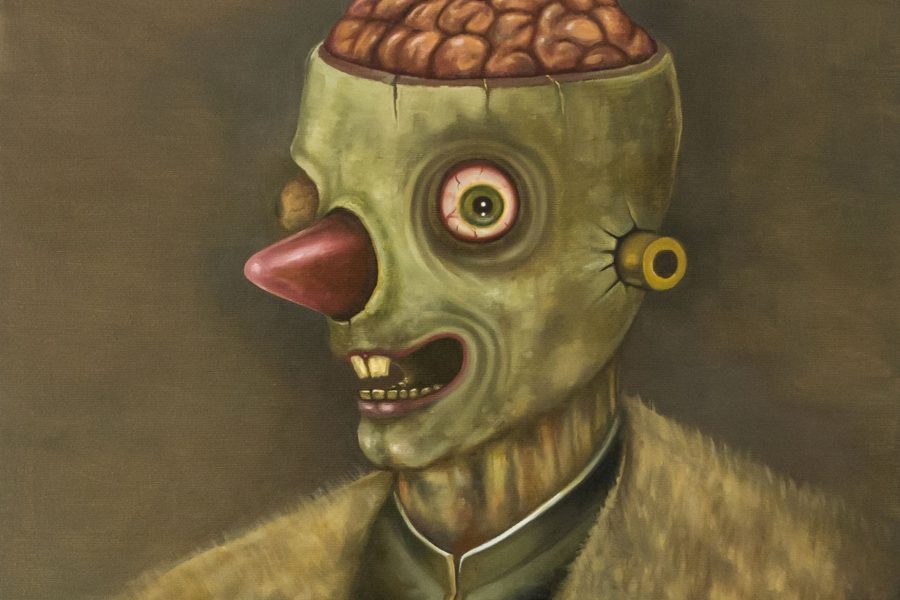