0
was successfully added to your cart.
Press enter to begin your search
Exhibitions Várfok Project Room 2019

The next exhibition to be held in the Várfok Project Room titled “…present continuous…” features the latest works of Roland Kazi.

Roland Kazi (1987 Kiskunhalas), a recipient of the Derkovits scholarship, is one of the youngest of the artists of the Várfok Gallery. He graduated from the Media Design course of Moholy-Nagy University of Art and Design, Budapest in 2014, following which in 2015 he continued his DLA studies on the Multimedia-Art course.

His current exhibition typifies Kazi’s diverse use of media – kinetic installations, objects, videos and photographs – where his concern is with questions relating to the perception of reality, infinity, remembrance and even the concept of space and time.

The artist formulates the background of his thoughts for the exhibition in the following way: “First the moving body has to reach half of the first section, then half of the next, then half of the following section and so on, until infinity. The body in motion has to cover infinitely many points during a finite period of time, which is impossible, since the motion does not exist. The renowned aporiae of Zenon of Elea are not only threatening the actuality of space but also the particularly vulnerable and fragile reality of time. There is hardly any phenomenon more incomprehensible yet more tightly connected to the reality of everyday life than space and time. Space and time are the delicate conundrum of metaphysics which is born in observation and intellectual thought giving rise to such imponderable questions as: Are we the mere systems of floating ideas? Beyond our observations, could there be something invisible and intangible which is called matter? Do our sensual impressions in succession create the illusion of time?”

Roland Kazi demonstrates the aforementioned ontological problems in the joint sets of art and science. 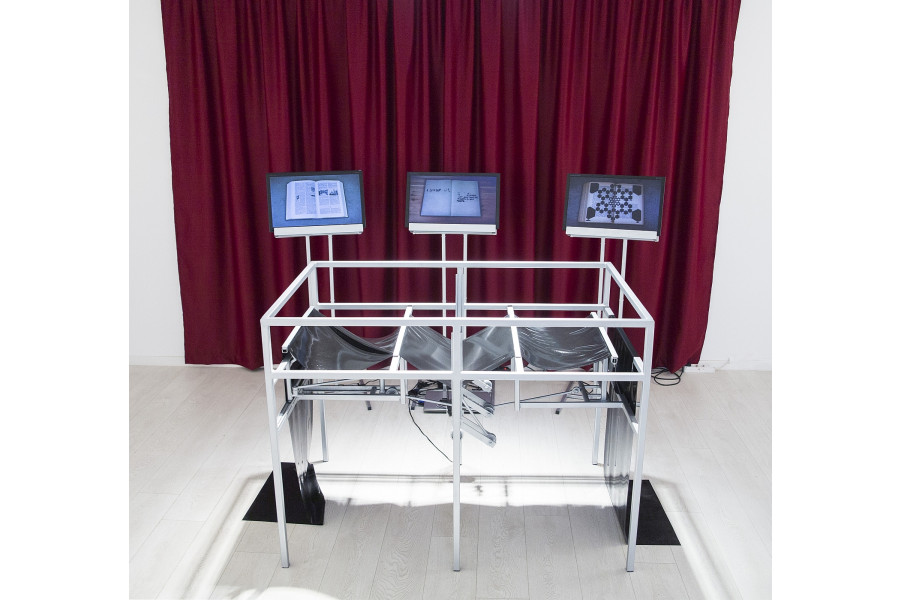